I am really excited to be at PNNL – there has been a queue of people wanting to talk about semantic data. We go over the fundamentals – if there are N ontologists in a room there are > N^2 fights. Ontologies are very close to people’s souls – they have developed their world models over years and they are similar but slightly different from everyone else’s. So we agree to keep things simple – and that’s feasible in down-to-earth physical science.

We are starting with two areas where data needs to be captured and searched (NMR spectra and Compchem). Here’s compchem 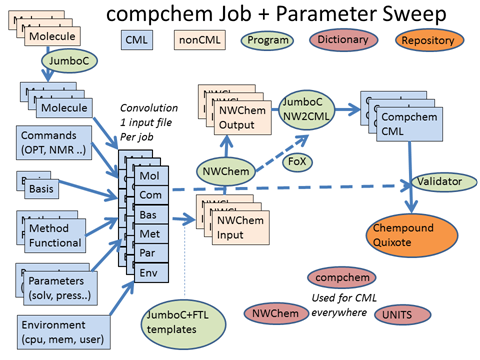 We’re using NWChem – IMO the world’s leading Open source computational chemistry (QC) code and arguably the leading one anyway. (It’s difficult to tell because the closed source ones don’t all allow benchmarks.) So NWChem is the centre. Traditionally it takes input (pink) and produces output (pink) , the point being that this is often done by hand. Some codes have GUI stuff and there’s also quite a lot of contributions from the Blue Obelisk. But what you are looking at is a leap beyond that – Quixote, dictionaries and Chempound. All, of course, Open. (Which makes it easy for any others who wish to interoperate rather than compete).

The problem with hand created input is it doesn’t scale, is desperately tedious, there are frequent human errors, little machine validation of quality, etc. We can fix all that by using Chemical Markup Language (blue). The job itself is described as a product of about 6 axes:

Generally we can mix and match any of these (and that’s called a parameter sweep. We might have a fixed protocol and wish to apply it to 10,000 molecules. Or we might wish to take just a few molecules and try 50 basis sets (to see which gives the best agreement with experimental measurements. Or to step through a series of pressures, maybe modelling the earth’s crust.

The parameters are abstractions and independent of the program syntax. In principle they can be used with any of the main programs. The framework means that chemists don’t have to worry about the syntax. So Quixote will generate all the CML input files. These are then converted by templates (automatically) to program input (in the future we’ll use CML directly).

The program runs and creates outputs. These are normally created for human viewing but we’ve written JUMBOParser that reads them and extracts all the information into CML. This is then ingested into a Chempound repository (which holds the native input and output, the CML and also transformed RDF). And today we got the Chempound repository working here. It now ingests NWChem files. The repository is designed to allow very sophisticated searches (using RDF, SPARQL and InChI/CML). Currently very few computational chemists store their output in searchable form. Quixote is changing that.

We can be even more professional. Rather than transform and parse, we can read CML directly into the program. It needs a bit of tweaking, but that is done with FoX. FoX was written by Toby White and now tended by Andrew Walker at Bristol. FoX is a library which reads and writes XML in FORTRAN. A bit creaky compared with other languages but it works.

Then there are the dictionaries. EVERY CML component in the file must be described by a dictionary entry. That means we have to write them, and we are doing exactly that. Hard work, but necessary. Of course you don’t get impact factors for doing it, though you should.

So one more three-quarter day. I haven’t been here long enough but the momentum is unstoppable.