ePUB is a revolution in scholarly publishing. We explore BioMedCentral’s offering.

Scholarly publishing is one of the least enlightened industries of this century. Retail, travel, entertainment, medicine, democracy, and much more have all either been completely changed or show the potential. Yet scholarly publishing idolises the print image (PDF) coupled to a mark of esteem (Journal Impact Factor) as worth paying 3000 USD for 10 pages. It’s absurd to argue that humans were born to read double column PDF on landscape screens and it’s the pinnacle of graphic presentati0on. It’s not. And the idea that readers love the variety of different presentational brands from journals – this is only done for the marketers, not the readers.

Now some publishers are starting to use a new format, ePUB. BioMedCentral have pioneered this (let me know of others) http://blogs.biomedcentral.com/bmcblog/2012/12/11/biomed-central-now-publishes-in-epub-format/ . This deserves much more praise and use than I think it has had, and I’ll explain why.

I, and I suspect many other readers/consumers, hate the way that science is presented by scholarly publishers. My remarks apply to almost all publishers, independently of whether they are “open access” or not. Simply, no publishers care much about their readers. There are three main approaches – some publishers have only one – some have all three.

What’s happened is that the original HTML had a quoted section. Something like:

The increase in … with a technique we call “range modulation”. With modulation …

The publisher – or more accurately the contractor they have outsourced to – uses a garbage toolkit. There’s a standard way to treat quotes (&quot;)and it’s been used for 20 years. It’s actually easier to produce conformant HTML than garbage. And there are zillions of free tools. But the crap above crashes all the HTML parsers I have used.

People have paid for this – maybe thousands of dollars. Libraries should cancel/reduce subscriptions. Authors should refuse to pay APCs. If a garage fills your brake fluid reservoir with screenwash they can be prosecuted. But no one cares about the quality of publishing.

So now we have ePUB. https://en.wikipedia.org/wiki/EPUB . Potentially ePUB takes us a giant step forward. HTML suffers because while it is good at representing semantic and document structure, and can be repurposed, it’s terrible as a container format (you cannot easily distribute images with HTML). Conversely PDF has no semantics and cannot be repurposed, but is a tolerable container format for images.

ePUB supports both of these. It’s a standard format (ZIP) that contains a series of components (HTML, images, XML, etc.). It’s SVG friendly (which in itself can revolutionise science). So I have downloaded a sample from BMC and started to analyse it. If a publisher WANTS the reader to read the content, then it’s a good start. For publishers who do not want people to read their output and (even worse) reuse it, it’s a major threat. (except – salvation – by DRM we can stop anyone reading it). (When we see the first DRM’ed ePUBs we’ll know it’s 1984).

Here’s the example (http://www.biomedcentral.com/content/epub/1471-2105-14-172.epub). [It won’t do anything in your browser unless you have an epub reader, but it’s easy to do this in Mozilla – and I suspect others (see https://addons.mozilla.org/en-US/firefox/addon/epubreader/ and chrome://epubreader/locale/welcome.html ).

If you want to have more information about EPUBReader, please read the manual or the FAQ.

Here’s the display. It fits the screen precisely. No vertical scrolling required. Horizontal scrolling, because we’re on a horizontal device. No need for typesetting!! 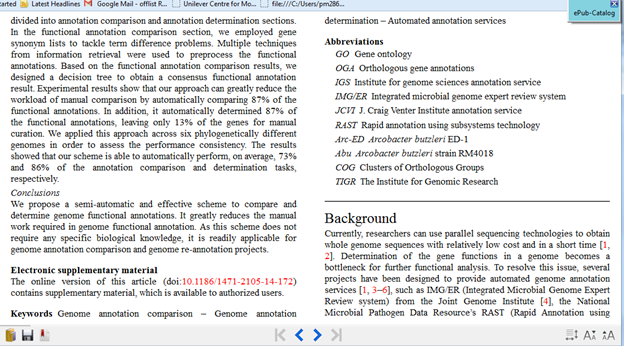 Isn’t that already a zillion times better than PDF? Yes, so why don’t you demand it?

But that is only 10% of the value of ePUB and I’ll discuss that in a later post.

8 Responses to ePUB is a revolution in scholarly publishing. We explore BioMedCentral’s offering.