In the last two posts I have shown examples of how legacy publishers charge additional money for the re-use of CC-NC (“non-commercial”) articles. I have taken examples of the Royal Society of Chemistry and Elsevier, but this is applicable to almost all “closed access” publishers. There’s been quite a lot on Twitter. I have the honour to serve as a member of the Creative Commons (CC) Science Advisory Board so even if I cannot always give a definitive answer I can get one where possible. The area is complex and fuzzy, so here’s a brief introduction:

A number of publishers have adopted CC-BY as their only Open Access licences. This is to be welcomed. All the mainstream new generation OA publishers (BMC, PLoS, eLife, PeerJ, Ubiquity, etc.) use CC-BY. I argue strongly that any publisher charging authors (APC) should offer only CC-BY. It’s a fair bargain. Authors pay publisher and publisher has no special rights thereafter. As far as I know BMC or PLoS or … has never had any problems of downstream misuse. The paradigms of scholarship and other legal concepts are sufficiently powerful: “passing off”, “fraud”, “plagiarism” are not made worse by CC-BY – in fact the reverse as they can be openly indexed by machines and humans. AFAIK no serious re-use of BMC material (e.g. third parties creating fake journals) has occurred and I am quite sure that BMC would have defended this.

However a number of legacy publishers (traditional subscription publishers with Closed Access) now have APC-supported Open Access. Many of these do not use CC-BY, either writing their own (imperfect) terms or using CC-NC. This blog now deals with CC-NC and the harm it is already doing.

I should applaud many funding bodies (e.g. RCUK) and assessments (e.g. UK’s HEFCE REF) in insisting on CC-BY. In the light of this it is even more worrying that many reputable legacy publishers have developed CC-NC as default or lower-cost option. This is not in response to community desire, but is publisher-led. I shall show now how it hurts authors and readers and serves simply to increase the publishers’ revenue.

First what is “non-commercial”? It’s very poorly defined and hasn’t been tested in court for scholarly publishing AFAIK. It is probably MUCH more restrictive than you think. Non-profits can be commercial – taking student fees is a commercial transaction – the universities increasingly contract to deliver defined products. Before you rush to judgment read:

Creative Commons licenses and the non-commercial condition: Implications for the re-use of biodiversity information

A major implication from this study is that the definition given in the CC license is ambiguous, since both sides believe that the CC NC license term is “essentially the same as” or compatible with” their definition

Despite a long case history and detailed assessment rules, it is possible that an organization achieves non-profit status in one taxation district, and fails to do so in another. Assessing the non-commercial intent of individual actions in court may be vastly more complicated

So while Richard Kidd of the RSC may think it’s obvious that teaching is non-commercial, I and many others don’t.

However I shall now choose a clearer case of a book author. I’m using the RSC as the example, partly because it’s easy to get the figures and partly because I sincerely hope they will reconsider the use of CC-NC after seeing the harm it does to authors and readers. Lets’ assume I want to re-use an image from an article in a book.

So let’s assume I am writing a book. This is undoubtedly a commercial activity. I go to the RSC site and ask to reproduce the images in a book 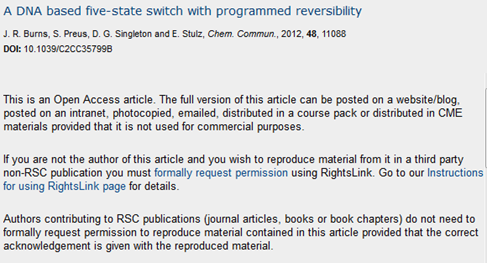 It’s clear – I hope – that I have to consult RightsLink: 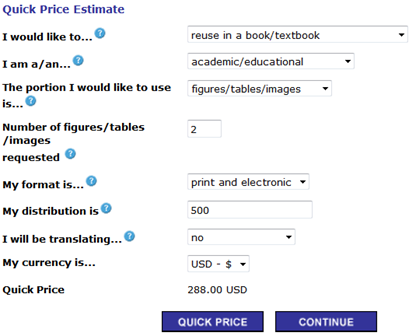 This should be absolutely clear:

If I want to re-use 2 OPEN ACCESS APC-paid images from RSC in a book I have to pay nearly 300 USD extra. The author gets no benefit. It is pure profit for RSC and RightsLink.

It’s a serious disadvantage for the author. One likely outcome is that the book author will simply not use image in the book (I know authors who have taken this view). The work might even not be cited. Did the author really understand that the only beneficiary of CC-NC is the RSC?

It’s a serious disadvantage for the book author. They simply won’t use this material.

And CC-NC does nothing to prevent re-use of the ideas in the article as HeatherM suggests – it simply prevents re-use of the image which is bad science.

So science suffers and the only potential gainer is the publisher’s income.

(BTW Rightslink will also charge the same amount for a thesis – don’t take my word, try it.)

So please RSC change to CC-BY. I have no idea why you use it. You can only gain from changing. And I would applaud it (as I have done for other publishers like Springer).