Can I vote with my face covered?

Why do I vote dressed in a bear suit? 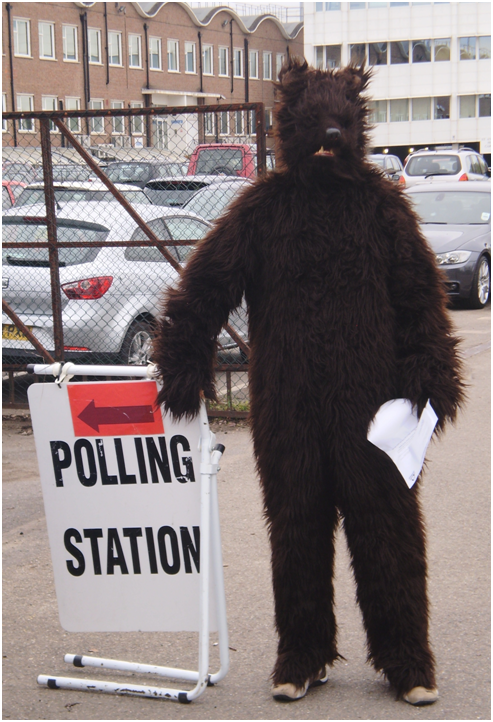 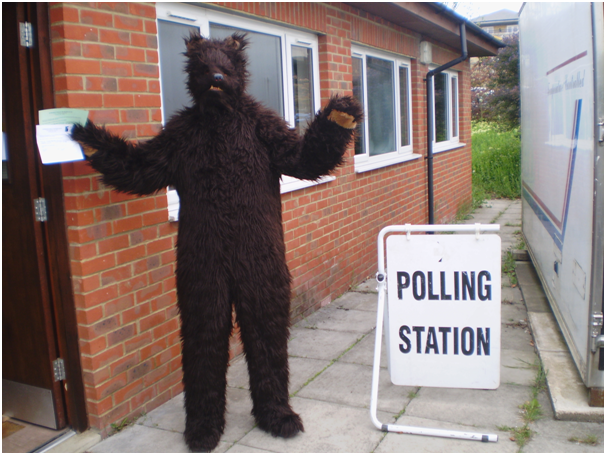 The original reason, which still stands, is that I wish to know how well the electoral process checks against impersonation. I wanted to go with my face covered and see whether I was challenged. The first time I did this I look for something which would cover my face and pulled out my bear suit which I had had specially made about 25 years ago. I used to go to school and entertain the kids in it although it’s a little bit scary. So when I first voted in Cambridge I went down to the polling station in normal dress and asked whether I could vote so that my face could not be seen. The presiding officer said this was permissible So I dressed up in the bear suit and went down to vote. However when I got there she insisted I show my face to check my identity.

On subsequent occasions I have voted in the bear suit and not been challenged. So today I went down in my bear suit. The presiding officer required to me to take my head off so that he could see my face. I have assumed that this is the legal requirement. However I have been alerted to an article from the BBC where election officials have stated that one can vote with one’s face covered. I reproduce the section of the article.

CAN I COVER MY FACE WITH A HOODIE OR SOMETHING ELSE?

Yes. It’s true that polling station staff are on the lookout for people trying to vote twice by impersonating someone else on the register. But Rob Connelly, head of electoral services in Birmingham City Council, says that there’s no requirement for voters to show their face. “If you can’t see someone’s face we can ask them the statutory questions – things like their name and address. We wouldn’t stop someone voting if they’re wearing a hoodie or a burka.”

So it appears that I can vote completely dressed in my bear suit and will continue to do so. To resolve the situation I shall make a formal freedom of information request to Cambridge Council asking them what the legal position is. Unfortunately whatdotheyknow.com is of the air at the moment but as soon as it comes back I shall make this request.

Having established this small tradition and having been recognized at the polling station as having voted in this way before I have looked for a slightly wider significance. It may seem frivolous but it highlights the fact that voting is a special occasion –I call my bear suit my “voting suit”.

I’d be grateful if anyone can give a definitive answer on the question.

NOTE: I have updated the blog with pictures. The bear voted TWICE! Is this illegal? Is it the same bear? Can you tell? Is either of the bears me?

2 Responses to Can I vote with my face covered?