Carsten Niehaus (of the Blue Obelisk) has posed a puzzle – it must be catching. It’s about finding the ordering of density of three liquids with only two weightings. I don’t know whether there is an answer… I suecpt the question isn’t well defined.
But it reminded me of when I used to meaure the density of crystals – such as the mystery molecule (I hope you know what the answer is now – maybe I’ll give some hints below)…
So how do you measure the density of a crystal almost smaller than you can see? You can’t weigh it and measure the volume… You do it by flotation. Just find two liquids of different densities – say chloroform and hexane. Chloroform is denser than hexane. Assume the crystal has a density somewhere in between. Mix the liquids and drop the crystal in. Does it float? If so, add some more hexane until it neither floats nor sinks. Then find the density of the liquid by measuring some liquid and weighing it. The density of the liquid is the same as the density of the crystal.
Why should we do that? Well the density is an intrinsic property – it is the same throughout the crystal. So even if we chop it into chunks with a few atoms the density is the same. So if you know the size of the unit cell (amd hence the volume) – from X-ray crystallography – you can find the mass of the unit cell. That’s a simple integer multiple of the molecular weight – that’s how I determined it was “about 250”.
I mentioned the problem to my colleague Jonathan Goodman and he knew in 3 seconds..
The answer is actually contained in the post Mystery Molecule – more clues… just inspect it very carefully.
I’m feeling generous – Here’s an important part of the mass spec of the molecule. It might give some hints. (The x-axis is hamburgered – but no worse than some of the supplemental data that gets deposited.) 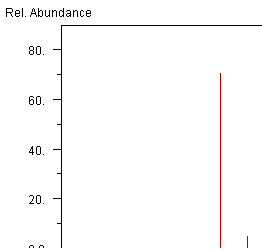 This entry was posted in chemistry, puzzles. Bookmark the permalink.