Some years ago Elsevier  led a PR campaign, PRISM, to discredit Open Access. They paid hundreds of thousands of dollars to a PR “expert” Dezenhall whose speciality is dirtying people and organisations. He told them that they should promote Open access as “Junk Science” and (see  Peter Suber)) Dezenhall also advised the AAP “to focus on simple messages, such as “Public access equals government censorship’”
Elsevier are even now trying to push through the FIRST act in the US, another zombie reprise of PIPA, SOPA, RWA, etc.
This is the company which leads the scholarly publishing market in terms of revenue.

Harry Belafonte and the secret proteome of coconut milk

Proteomics is the science of discovering and identifying proteins in samples, usually via chromatography and mass spectrometry. It has nothing to do with Harry Belafonte (a singer) and even less to do with the picture below which is included in the paper. 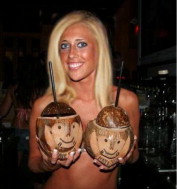 Scholarly publishing is about reporting science in a way that can be repeated and used at the basis of more science. This degrades the message .
I have used the image without permission as it’s fair use and fair comment.

One Response to Elsevier's Junk Science