SpotOn2013: Yet another wonderful meeting

The last two days I have had a wonderful, if exhausting time at SpotOn (known in the past as Science Blogging and Science Online). Ross and I were organising a session called “What the hack?!” about running science hackdays. Sophie Kershaw (now Kay), Panton Fellow, ran a session on reproducible science using Lego, and Salvatore Mele (CERN, library) gave a sensational keynote on the Higgs Boson. But much of SpotOn is meeting people, and in particular I have very useful contacts and discussions relating to The Content Mine (more later).

And met many people with new ideas. There’s an ever increasing dissatisfaction with the status quo in formal scholarly publishing and communications. Universities are becoming metrics factories, driven by large corporates. New ideas get commercialised and used to reinforce this process. Privacy and autonomy of scientists is under serious threat. (more later). So I was pleased to find people who want to challenge that. One in particular comes from the disadvantaged periphery of European science (Spain, Greece, and others) and is now effectively priced out of mainstream science. They can’t buy journals any more and they cannot pay for “Gold Access” (nor, for that matter, can I). (More later, when, I get their manifesto).

“What the hack?!” had 5-minutes from Martin Fenner (also an organiser of the whole event) and Helen @DeckOfPandas Jackson. I’d met Helen at NHS Hack Day last weekend and immediately realised what she could bring. She gave a sparkling presentation, full of passion, good sense, experience, in a style where she wastes no time getting the message across. She was also invaluable in picking up questions and discussion. Unfortunately our session was only 40 mins, but I thinks everyone was able to contribute or be enlightened.

Ross and I had assumed that most people would be familiar with hacks. Actually only about 25% knew what one was and fewer had been/organized. So whereas we had planned to structure the discussion so all delegates could get a chance, in fact it was a free form Q and A session. For one delegate hacks include physical hacks/making and I’d re-inforce this. Hacks are enhanced by (say) cakes, knitting, and toys [Chuff came to our session although Chuff is not a “toy”].

And that moves into Sophie’s brilliant workshop session on “Making Research Useful: The Consequences of (Bad) Communication” with Lego (see http://sophiekershaw.wordpress.com/2013/11/09/solo13lego/ . Sophie told us that the first 6 months of her DPhil were wasted because the paper she was feeding off misreported the (computational ) experiment (starting conditions were’nt described). So she organized us into 5 groups of 10. Each group was to build a Lego microscope and each had instructions. 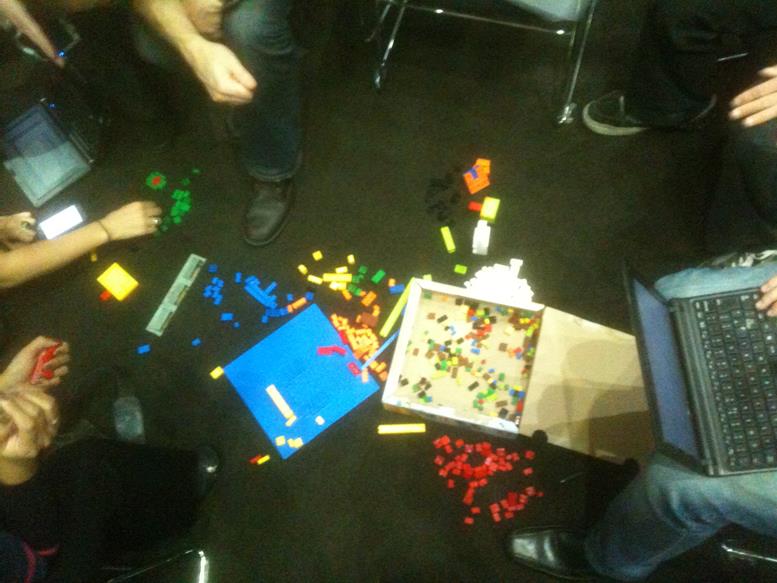 We were told that the instructions were slightly wrong and slightly ambiguous. No group could talk to another group and we had 35 minutes.

It was wonderful activity. I won’t give details as Sophie will be repeating it many times – read her blog, not me. Finally 5 microscopes were created. (I think ours was the worst). They were all different:

This is one of the best workshops ever.

It could be taken into a primary school, a management course, a programming course, and of course University. I would make every undergraduate do it (probably a 3 hour session and Sophie has many more ideas). It emphasizes formal written communication between people in different places and different times. It stresses modularity and structured work.

I know Sophie spent many evenings working on it. That shows that even brilliant ideas need hard work.

I hope that many of you will see opportunities and followup with Sophie.

One Response to SpotOn2013: Yet another wonderful meeting