Making images Open can and should be routine

One of the many serious problems in re-use of scientific data is that it often occurs in diagrams. Here’s a simple example taken from http://www.biomedcentral.com/1471-2180/11/174/ (BMC is an Open Access, CC-BY publisher so there’s no problem with anything in this blog post …)

These are diagrams which simple record x-y data pairs and an estimate of the relation between them (lines and curves). A reader might very well want to extract the data and reanalyse them. Or simply post them, perhaps to applaud them or to criticize them. After all that’s science.

But images are copyright, aren’t they? A list of numbers is data, but an image? Might I get sued if I try to re-use the diagram without permission? Well, that’s what happened to Shelley Batts, when she did just that – she got a legal letter from Wiley (http://boingboing.net/2007/04/26/wiley-threatens-scie.html ). After huge blogosphere reaction, Wiley retracted the threat – to Shelley – but they have never said they won’t do it to someone else.

And there’ good reason not to. “The publishers own the copyright”. And they can make money by reselling images. Many publishers will charge to include an image in a publication (over 50 USD – see Springergate ) /pmr/2012/06/13/springergate-springer-replies/ where Springer claimed copyright on all images in their journals). The immediate effect of this is that authors can’t afford to re-use images and so science suffers drastically.

Note, of course, that the publisher normally makes ZERO contribution to the creation of the image. (They may reject it for technical commercial reasons – too “difficult”/ doesn’t fit their publishing workflow). But they “own” it.

Do scientists want this? If you are an author do you think:

” I want the publisher to make money from my images and prevent other people reusing them for legitimate purposes”.

If you do, stop reading…

But if you would like your images to be free for reuse, here’s a very simple thing. I built it in a 45-min train journey to hack4ac – it can be improved easily. You just run a 1-page Java program, that merges your image with a small icon indicating the image is free to re-use. It takes less than a second. It could be run as SoftwareAsAService (e.g. hosted in the cloud). Here are two examples of adding a simple tag (the first is deliberately large so you can see it).

Here the legend includes the authorship (this is trivial to customize) 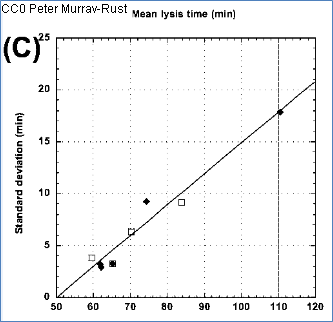 The importance is that it is immediately clear that the image is free for re-use. (We could use CC-BY, but CC0 is probably more suitable). Note that nothing the publisher does, nothing you sign, takes away this right. The image carries its own permanent copyright.

And moreover it’s trivially obvious to all readers. It spreads the word.

It will save millions (literally) in saved time and effortless re-use.

A simple and effective way for it to be encouraged and implemented would be by all image-producing software (e.g. ImageJ, phylogenetic tree s/w) to offer this as default. If you WANT to give the publisher exclusive rights to resell and restrict your work you can switch the default off.

And, of course, some legacy publishers might even welcome it. (Stop fantasizing, PMR!)

2 Responses to Making images Open can and should be routine