#springergate: I try to explain SpringerImages and my continuing concern.

I have been undertaking a slightly systematic analysis of what SpringerImages is. 2 days ago I was contacted by Springer(BK) in a phone conversation [1]. Note: I shall simply record the initials of the person that spoke or wrote to me as the conversation is symmetrically impersonal – they regard me as “Mr Peter Murray-Rust, Blogger” and I regard them as a legal commercial organisation, essentially no different from an insurance company, a gas provider or a train company. They are part of our capitalist society – I have no problem with that. I owe them roughly as much goodwill as I owe my bank. I trust them as much as I trust an airline company.

But for the most part they are not part of the scholarly community. Their CEO has implied as much – Springer’s Business purpose is to make money from selling to universities and others. (http://www.infotoday.com/IT/jan11/Interview-with-Derk-Haank.shtml ) They provide goods and services to it. They also hold IPR and sell or licence it to the scholarly community.

Springer(BK) asked me to explain in my blog what had gone wrong at SpringerImages. I said I couldn’t do this – I wasn’t responsible for the site and didn’t understand it and I asked Springer(BK) to explain it themselves. To my knowledge they haven’t done so. So here goes…

I have a major concern with SpringerImages, quite apart from the current “glitch”. Let me get the glitch out of the way, first. Due to what appears to be a computer problem of some sort (Springer have not clarified) some of my CC-BY work published in BMC was presented as being copyright BiomedCentral and relicensed under the more restrictive CC-NC licence. Matt Cockerill of BMC has assured us that this will be rectified. I trust Matt completely. Matt and many of his colleagues in BMC are valued members of the scholarly community. If the glitch were the only problem I would have ceased to blog this. NOTHING THAT FOLLOWS RELATES TO BMC OR MY WORK.

My concern is the concept and the implementation of SpringerImages as a whole. My position is similar to to what Klaus Graf said in 2009 (/pmr/2012/06/06/springergate-springerimages-for-today/#comment-108454 ) I reiterate that I do not know whether the “glitch” affects my current perception of SpringerImages, but that does not prevent me analysing it as it operates today – Springer can correct any assertions that are created by the glitch.

Since I do not wish to be continually asked to RETRACT “outrageous” statements I shall confine myself to FACTS, HYPOTHESES and QUESTIONS. The questions can be thought of as abstract examples of questions for students studying law or ethics, for example. I shall not offer answers to the questions, but if readers wish to I am happy to highlight their posts.

So, for example, Lawrence D’Oliviero asserts that the technical term for SpringerImages is “copyfraud” (/pmr/2012/06/06/springergate-springerimages-should-be-closed-down-until-they-mend-it/#comment-108471 ). I cannot possibly agree or disagree as this would be “outrageous”, but I can ask a Question, such as

QUESTION. Explain the term “Copyfraud” (you may quote from references in Wikipedia ((http://en.wikipedia.org/wiki/Copyfraud ) with attribution) [10 marks] . Does copyfraud extend to scholarly publishing? [20 marks]. Note: be careful not to make assertions about individual publishers unless they have been tested in court.

So in the absence of Springer(BK)’s contribution I will give a brief, informal, almost certainly incomplete and occasionally incorrect overview of SpringerImages

SpringerImages contains 3.4 million objects (mainly images,tables, line art, video, etc.). Here’s a screenshot (NB I am publishing these screenshots without asking permission as I think it’s in the public interest). 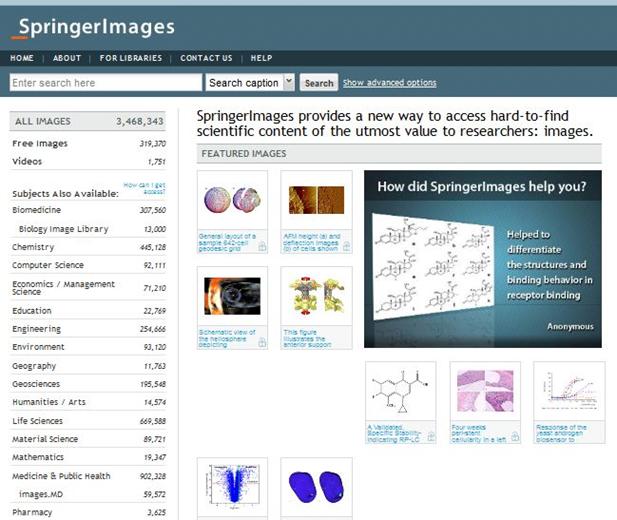 I’m going to use exactly what I see – I haven’t selected. What’s the basis:

Springer do not say where these images come from. In some informal discussion Springer(BK) asserted that the content only came from Springer Books and Springer journals. I will continue on this basis, but I would appreciate confirmation (there appeared to be occasional items from other commercial publishers, but I wouldn’t know).

“Images … can be used for almost all non-commercial purposes”. I shall test this.

Which images are Free? It’s unclear. If I click “free images” I get ca 300K results. So I assume that about 10% of the site is “free” (whether in beer or speech I don’t know). I’ll assume 10% that as Springer(CEO) said that they didn’t see OA going above 5%. I click on the first free image, it’s copyrighted by BMC and distributed as CC-NC (presumably this will be corrected to “the authors and CC-BY when the glitch is gone). No problem. Let’s look at the rest

So here’s an image from the current page. 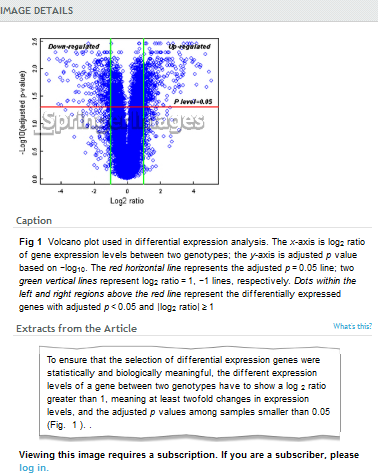 So it’s presumably from an article? Which article? I have no idea – So presumably I can’t see the article details unless I subscribe (USD 600). So to decide whether I want it I have to invest quite a lot.

OK lets’ assume I lecture on volcano plots and this is a wonderful example. Can I get permission to use it in my lecture?

I am not a subscriber, but maybe I can get it for “non-commercial purposes”. Such as “teaching?”. I ask for a quote (expecting to be told it’s free) 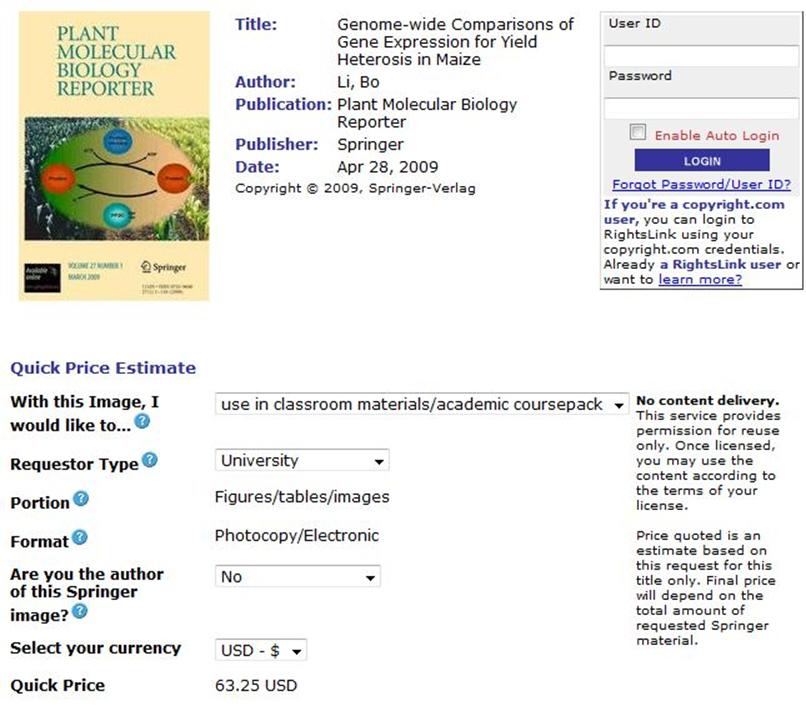 So sorry – teaching is a commercial activity. BTW this is the first time that SpringerImages appears to have given an attribution to the images. So a handy hint – if you want to find out which article something was taken from pretend to buy it for teaching and it may tell you.

Some authors naively assume that if they have published something then it can be easily re-used for teaching. No! everything you publish is claimed by Springer and resold. If I wanted all the images in this single article, it could cost hundreds of dollars (even though I am sure there would be a generous discount).

So now I want to see the data. Perhaps they are in tables. Let’s go to one. The caption of the table is “Validation of 19 differentially expressed genes by qRT-PCR”. What’s the contents of the table? I’d have thought it was the actual data. But the “IMAGE DETAILS” are a GIF which reproduces the words in the caption. So presumably I can’t see the actual table contents unless I subscribe (USD 600). So to decide whether I want to see this table I have to invest quite a lot. 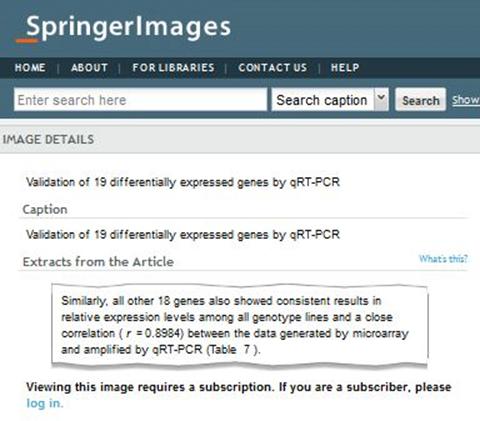 ALMOST EVERYTHING YOU PUBLISH IN A TOLL-ACCESS SPRINGER JOURNAL IS LIKELY TO END UP IN SPRINGER-IMAGES, BE COPYRIGHTED BY SPRINGER AND BE RESOLD FOR SIGNIFICANT AMOUNTS OF MONEY.

And, of course, Springer has carefully checked the rights to every item and respects the rights of every item that it doesn’t “own”. It only copyrights those items it has the right to do so. It says so, so I have to believe it.

Unless you tell me different.

I shall be contacting some of the apparent rights holders and asking to see whether they have given Springer permission to copyright their material, rebadge it as Springer images and resell it. I am sure they will confirm that they have agreed this with Springer. And of course I’ll let this blog know.

Unfortunately I seem to have found an awful lot of people and organizations I am going to have to write to. I’d appreciate some help…

[1] (Note: I inadvertently confused Springer.com with springerpublishing.com – from now on I shall refer only to springer.com – a phrase which includes the many subsidiary companies).

8 Responses to #springergate: I try to explain SpringerImages and my continuing concern.