WRONG – on both counts.

Mike Taylor has done an awesome – truly awesome – job in pulling together our ideas and hope for the @ccess movement – the imperative to make scholarship available for the #scholarlyporr. Those are the people who don’t have access to a University library. And access doesn’t mean driving to a building, filling pout forms and getting a paper copy. It means online access. Immediate and expansive. Because that’s the only form of access that’s now reasonable for scholarly articles [I deliberately omit books].

Mike’s been interviewing the scholarly poor. I’ve done an interview [http://whoneedsaccess.org/2012/02/18/peter-murray-rust-chemistry-researcher/ ]– just because I’m at a rich university doesn’t mean I can use the electronic library as I want to. My research is stalled because the publishers forbid it. Everyone is scholarly poor when it comes to text-, data- and image-mining. But you know all that.

What’s tremendous is the stories that are emerging. And I get the impression from Mike that he’s got a number yet to be published. So here’s someone who passionately wants to read the dinosaur literature. http://whoneedsaccess.org/2012/02/21/craig-dylke-teacher-and-artist/ You’ll need to read it yourself, best beloved, because I can’t show his dinosaur pictures. Here is he teaching, and I’ll give some exceprts below: 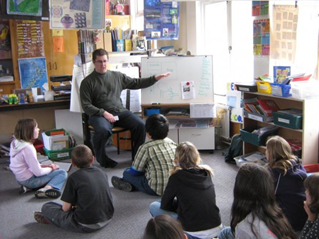 CD: I try to help connect the science of palaeontology to a larger audience. Palaeo-art lets me do this in a way that combines my childhood obsession with palaeontology and my love of digital art. I’ve become so interested in the the philosophy, and methodology of palaeo-art that, together with Peter Bond, I co-founded the community blog ART Evolved where we discuss and encourage palaeo-art of all forms.

But why does Craig need the literature?

When you scientifically reconstruct an animal, every detail of its physical appearance is important. For most prehistoric life, the only place to get details about fossilized remains and informed speculation on what that extinct life might have looked is in the scientific literature. From my perspective as an artist rather than a researcher, the most useful part of papers is the diagrams and photographs of the fossils

Craig cares about getting it right. As simple and as important as that.

… there are times when I would love to have it to check “facts” in popular children’s books. The number of factual mistakes in these books is sometimes quite alarming. Being on top of the most recent publications can also lead to good discussion topics for my students: news outlets only report a fraction of new science discoveries.

The fees for subscriptions, or for single papers are simply outrageous. Many of my digital art software packages cost less!

Limited access to scientific literature has also created an interesting problem in palaeo-art. Without access to source material, many artists resort to referencing other artists. Then you get artistic “memes” in which organisms are consistently shown with characteristics that we have no actual evidence for. (Since the art is the closest thing we have to photographs, they gain an implied credibility when repeated enough times). This runs completely counter to my science education goal.

Frankly that answer is simple. Either researchers only publish in free access journals or the publishers get with the times and open access to their content.

I’d also like to see more journals offer unlimited illustrations for authors. On any given subject PLoS papers are almost always the superior source material for me as an artist, as the authors tend to fill them liberally with photos and diagrams of their specimens. Too often I’ve been disappointed to track down a critical paper on topic from a mainstream journal only to find there are no diagrams or photos, leaving me at square one on my restoration.

As I have already noted, even a fraction of the scholarly literature is valuable. We’re fighting to get it all, but until that time we are trying to get as much as possible together for Craig.

And there’s no money in dinosaurs, is there? Jurassic Park grossed 900M USD. By depriving the creative #scholarlypoor of the literature we are denying them their full potential.