Stop HR3699; The Open Access movement needs to get ACTIVE; the Scholarly Poor already do

I have been blogging for a week about HR3699 (Research Works Act). I have been trying to take personal action – apart from blogging I have mailed OUP and CUP asking them to stand up and be counted on their membership of AAP.

Yet if I hadn’t been actively involved in open data I wouldn’t even have known anything was happening – that there was anything I should be concerned about. And no-one has tried to reach me and get me involved – even to sign a petition.

In contrast other Open movements such as F/OSS, Avaaz, 38 Degrees mail me every week asking me to sign on all sorts of issues. In the internet age it’s easy to reach out to people and provide means to get them involved.

This is a site (Care2, Jennifer P. – I’d never come across it) for “ordinary people” who care about access to information, especially health information. They are the “scholarly poor”. The people who – unlike rich Universities – actually feel the lack of access to healthcare information.

As soon as I heard about HR3699 I mailed the patent advocates I knew. And, of course, they have responded magnificently. Here’s Gilles Frydman, through the Society for Participatory Medicine. The Scholarly poor with real disease.

Before reading further, remember the definition of Participatory Medicine:

a movement in which networked patients shift from being mere passengers to responsible drivers of their health, and in which providers encourage and value them as full partners.

How can you be a responsible driver of your health if you don’t have direct access to all information? That’s why Dave has been fighting for his damn data and similarly why ACOR has been engaged in multiple efforts to maximize the dissemination of any and all scientific publication that relates to an ACOR group condition.

Seeing a corrupt travesty of the democratic process used today to promote the interests of a few gatekeepers at the expense of millions of people is very disturbing. The NIH and other agencies must be allowed to ensure timely, public access to the results of research funded with taxpayer dollars. Please oppose H.R. 3699. You’ll be in great company!

And there’s lots more [I quote from Gilles]

Tim O’Reilly [PMR One of the great entrepreneurs and thinkers of this century] Please don’t write laws that protect 19th century industries against 21st-century disruption!

[Gilles: ]Tim’s […] sentence may need some explanation, which thankfully has been provided by Microsoft Researcher and grand guru of social media’s influence on the youth, danah boyd, in her December blog post Save Scholarly Ideas, Not the Publishing Industry (a rant):

The scholarly publishing industry used to offer a service. It used to be about making sure that knowledge was shared as broadly as possible to those who would find it valuable using the available means of distribution: packaged paper objects shipped through mail to libraries and individuals. It made a profit off of serving an audience. These days, the scholarly publishing industry operates as a gatekeeper, driven more by profits than by the desire to share information as widely as possible. It stopped innovating and started resting on its laurels. And the worst part about it? Scholars have bent over and let that industry continuously violate them and the university libraries that support them. [..]

WTF? How did academia become so risk-adverse? The whole point of tenure was to protect radical thinking. But where is the radicalism in academia? [PMR emphasis]

Ironically, of course, it’s the government who is trying to push back against the scholarly publishing’s stranglehold on scholarly knowledge. [..]

Please, I beg you, regardless of whether or not we can save a dying industry, let’s collectively figure out how to save the value that prompted its creation: making scholarly knowledge widely accessible.

[I acknowledge that there are people who are working hard to change opinion on Capitol Hill and I respect them. But it’s closed. It’s a small group of people who don’t tell the world what they are doing. Maybe this is necessary secrecy but it leaves the mass of people outside the OA movement uncoordinated. There’s Richard Poynder who has already mailed all the University Presses. But if there are other activities no one is publicising them sufficiently.]

As a result the activist response is either missing or fragmented. Some instances:

Here’s a typical simple action – my avatar. I got the idea from Glyn Moody. YOU could do it. Don’t be afraid – it’s not illegal to protest publicly. 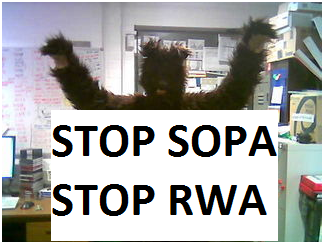 There are many more things that you could do, but I’ll use a separate post to give things that the Open Access movement could be doing now. All within the holy law of copyright. There’s hundreds of millions of dollars spent on OA (if you include Repositories) – there’s certainly enough resources to organize 21st century protest activities.

Late last year I gave a slogan for the OA movement: “Closed access means people die”. It’s simple. It’s a political slogan. But I was severely criticized because it hadn’t been proved in a scientific manner. (Actually there is quite enough evidence supporting it). The point is that the OA movement has to use slogans to reach out beyond its narrow boundaries. I’ve offered the apparent double negative: “Open Access saves lives”. This is the sort of message we should be using.

Because it’s obvious that the Scholarly Poor – Jennifer P, Gilles, Tim O’Reilly, Dana Boyd are doing their own activities without the coordination of the OA movement. Their anger and passion comes through and it reaches out to the Scholarly Poor in a way that academia does not.

So, OA community – if there is one – start engaging with people outside – and that’s increasingly including me.

3 Responses to Stop HR3699; The Open Access movement needs to get ACTIVE; the Scholarly Poor already do