THIS REPRESENTS AN INTERACTIVE PRESENTATION TO https://sites.google.com/site/beyondthepdf/ ON 2011-01-20. The large letters are for projection

IF YOU WANT TO ASK QUESTIONS OF US IN THE BtPDF SESSION USE THE ETHERPAD:

Just go to this page and give your name. Don’t go in unless you want to ask a question – I will be showing the site 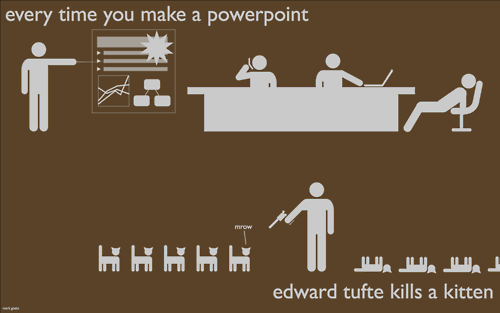 (used with thanks http://ilovecharts.tumblr.com/post/450388944/brownpau-everytime-you-make-a-powerpoint and probably violating copyright – not fair use but funny).

In case you are still reading I shall use this blog to present my message. Not “slides” but communication by “writing” – a form of linear communication. I’ll try to make this a “conversation” in places

“All Science is hypothesis-driven”.

No. Lots of it is data-driven. Part measurement and observation; Part computed. The result is data which can (and often is) published for its own sake. The fourth paradigm. Problem is:

OK – but data is hard, so it’s too expensive to do. All that collecting, standardising etc.

No it’s not. Vannevar Bush proposed the Memex (1948) to remember everything we do.

No – it’s possible it we wanted to do it. We make it a way of life and it becomes tractable

We’re already doing it. I’ll show 3 projects. Based on communities. Not how can I do this, but who wants to work with us.

But that means you work with your competitors!!!

I don’t have competitors. Just apathetics. Anyway here’s the projects. They are all ZERO cash.

They aren’t funded – they work with volunteer resources and marginal cpu+bandwidth+storage. Like Galaxyzoo. Open Streetmap. All results are O-P-E-N. Licensed with PDDL or CC0.

But Crystaleye only has half the literature…

…I have – several times. They never reply. Readers don’t matter.

So were the reactions getting greener …

… not that I could tell. But we’ll do another run.

But patents are grotty. Designed to conceal information. Why don’t you use the published literature? There’s 10,000,000 reactions reported…

… you’re getting the message

And Quixote. Why the name?…

… because PMR has mad expectations. And because it started in Spain…

So what makes it different?

… well NO-ONE publishes comp chem data. And it’s the easiest and best data of any discipline. The laws of physics work. So we will scrape scientist’s disks and convert them to semantic

You’ll have to give them the program…

… Yes we’ll let them use Avogadro. It’ll front up all the tough stuff. It’ll act as a computational Memex.

… it isn’t black. It just looks black. Browsers have a little way to go – see http://quixote.wikispot.org/Front_Page?action=Files&do=view&target=workflow.png 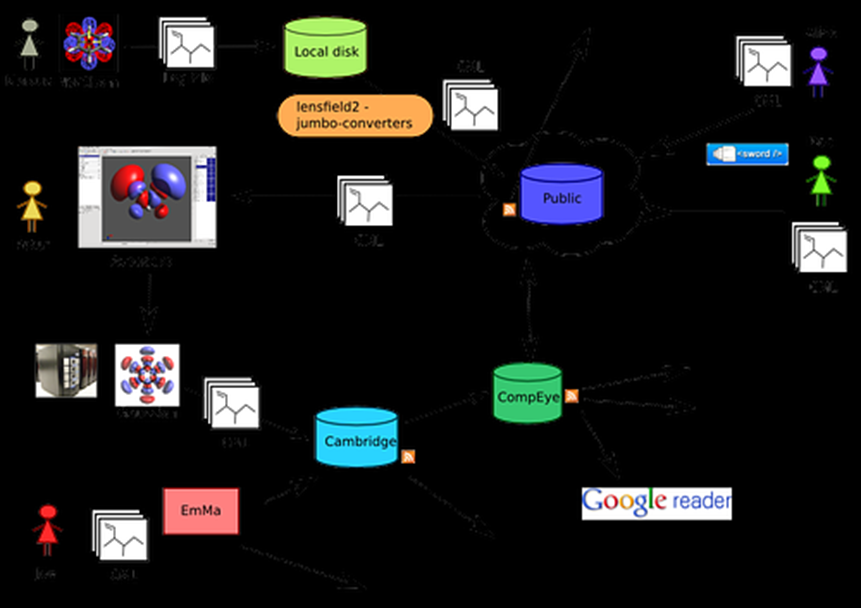 One Response to Scholarly communication let’s eat our own Dogfood