Why the British Bibliography is Wow!

I’ve posted recently on my Wow! Moment on seeing the British National Bibliography realeased in RDF by JISC and OKF. See http://lists.okfn.org/pipermail/open-bibliography/2010-November/thread.html which already has about 15 posts in less than a day. But isn’t the BNB (BTW do not confuse this with DNB http://en.wikipedia.org/wiki/Dictionary_of_National_Biography) just a collection of what books the BL contains? Why is that so important? Can’t I just ask them whether they have got a first edition of Lady Chatterley’s Lover?

This is the first time that I have “searched for a book” other than to buy a specific one or read a specific one. And what you get back from the BNB is not “a book”. You get a local graph in scholarship space. Times, places, events, comments, comments on comments… I had NO idea that so many books have been written about LCL. I do remember reading one of Lawrence’s works at school where he discussed LCL and he also had paintings of nudes which broke the then convention by having obvious public hair. I don’t think the paintings are hve4ry highly regarded now, but who knows? Anyway the books in the BL have doubtless got Lawrence’s illustrations. And the BNB will tell us which books actually have illustrations. But that’s just for starters.

Here’s some of the traffic:

It may worth pointing out that records created prior to

>publication, on the basis of information provided by the publisher,

Ah: that was probably the person they _wanted_ to write the book 😉

So this is much more than a catalogue of what’s in the BL. It’s a living piece of this century’s scholarship. It’s global. It’s Open. It’s dynamic.

Here’s Will’s new entry at Bibliographica (http://bibliographica.org/entry/c4bb7da2c60413acc06f2369746da92b ). [Don’t be frightened by the UUIDs – you’ll come to love them just like URLs): I can’t paste the format into this , it looks like: 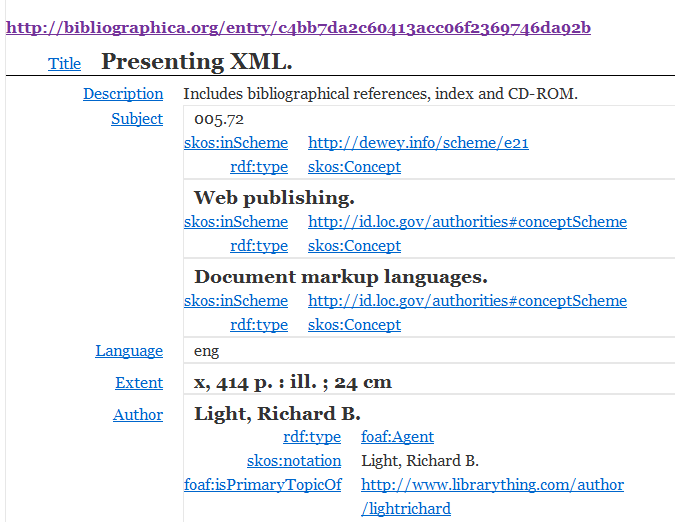 And if I follow the hyperlink at the bottom I find out all about Richard. (I’ve met Richard – one of the seminal influences in XML. So I’ll show this page – and who knows – you might want to read his other books!

So more Wow! I now know that Richard is interested in Museums! So (now) am I. Brian Kelly has a copy of Richard’s book. (I might even have one if I rummage). So the world expands at every node. It’s not a book collection it’s a Hyperbibliography.

POSTSCRIPT: I had hoped to be meeting more people in the Library community at http://www.library.manchester.ac.uk/scl/ and presenting this development and getting ideas. But the program has been rejigged and I am no longer going. I may be able to create my own library event in January – more later about that.

One Response to Why the British Bibliography is Wow!