OR2010: Sam Adams is runner-up in the Developer Challenge

Typed and scraped into Arcturus

Many things happened while I’ve been away and often it’s difficult to take the mernatl time to do them justice.

Anyway we put in an entry for the Developer Challenge at Open Repositories 2010 (Madrid) and we came second. Here’s the challenge:

We [Developer Challenge] encouraged teams comprised of developers working with non-developers (such as repository managers) to enter.  Just to reccap, the final challenge was:

Jim Downing thought we should enter and Sam Adams (who is working on the JISC CLARION project) came to bounce ideas off me. We had to get a “pseudo-user” and that was really my only role – to help steer the use case. Effectively Sam did everything and deserves all the credit. (Dev8D attendees may remember that Sam also won a prize there for his impressive interface to roll back web pages to previous years.)

Here’s the announcement for OR2010:

I’ve cut-pasted the announcement here but if it doesn’t work go to the link above.

Sam Adams runner up at the Developer Challenge 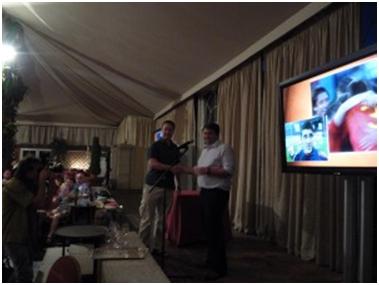 Sam Adams announced as runner up at the Developer Challenge

Video of Sam presenting his pitch

Interview of Sam talking about his entry

I haven’t debriefed IRL with Sam yet, but he was immediately generous in saying that we were beaten by a better entry and I congratulate them wholeheartedly.

Our (Sam’s) entry highlighted the problem of getting useful metadata out of many repositories. A typical example is that there is no unique identifier for the institution or its repository (at least not given in the repo). Given that we are meant to be federating repositories this isn’t going to be easy if we cannot identify them. There are too many clashes where University of X is different from X University.

And you would think it was easy to find the theses that are in an institutional repository… … well if you read this blog you’d know it’s often impossible.

So repositories have some way to go before getting all the useful metadata from them is straightforward.

But to end on a happy note. Well done Sam, Well done ULCC. Well done everyone. And many thanks to the organizers for cooking this challenge up – it’s great impetus and great entertainment.