Dictated and Scraped into Arcturus

There have been a number of useful comments on my blog posts relating to open data in climate science. I’m conscious that I am walking into an area that I know little about and will defend why I think this is useful. I will also tell you what I am not going to do.

I’d suggest that essential reading for anyone interested in these issues are:

Climategate The Crutape Letters by Steven Mosher and Thomas W. Fuller and

The Hockey Stick Illusion;Climategate and the Corruption of Science by A W Montford

It has often been said that the climategate emails were taken out of context. But with the full context, as revealed by Mosher and Fuller, they are utterly damning. And these were emails exchanged between leading authors of the IPCC reports.

Once you understand how the famous IPCC Hockey Stick Graph was based on erroneous statistics and dodgy manipulations of proxy data, as set out in verifiable detail by Montford, you wonder if anything at all from “climate scientists” can be trusted.

Nigel Lawson sat on the House of Lords Select Committee which reviewed Climate Change and its Economics in considerable detail in 2005, taking a wide range of technical submissions. If I recall correctly, they concluded that the scientific and economic aspects were potentially flawed by the overtly politicised nature of the IPCC process.

Lawson’s concerns should not be dismissed lightly. They are shared by many scientists in Earth Science disciplines closely related to climate science, but perhaps not directly reliant on research funding in this field.

As the individual whose Freedom of Information Request resulted in the infamous email “Mike, can you delete any emails you may have had with Keith”, I have to tell you that Fred Pearce is well wide of the mark.

If anyone wants to know why someone would try to procure the deletion of AR4 emails just two days after I asked for them, just ask me for a confidential copy of my submission to the Russell Enquiry and confirm that you will not publish it. It is not on the Enquiry website because Sir Muir’s Enquiry does not have Parliamentary privilege and it is worried about being sued. I guess that also limits what the Enquiry will report.

I think these are useful encapsulations of some of the major issues that came out of the meeting. I shall confine myself to specific areas where I consider that my contribution made a useful. There is no point in my acting as an investigative journalist or as a politician so I shall not concern myself with the past history of the E mails and the practice of climate scientists. Nor shall I get into the details of how the hockey stick was produced and whether it is a valid scientific instrument.

I do however, like many people, have expertise which may be valuable in this area. This relates to the general practice of science, whose principles are available to everybody, to the way that knowledge is communicated (again something that anybody has the right to be involved in) and slightly more specifically to some of the statistical processes which appear to have been required in some of the data analysis.

I do not actually intend to get involved in data analysis but I will argue that I have every right to do so if I wish. In my day job – cheminformatics – I use a range of data analysis and statistical tools which are likely to be highly relevant to the processing and analysis of data in many fields, including climate. For example I have many years of experience in principal components, error analysis, data validation and the validity of statistical fitting (“overfitting”). I am on the editorial board of J.Cheminformatics and many of the issues we deal with appear to be similar to those in other disciplines. I would therefore feel it unreasonable to be told that I could not have access to data in climate research because I might misinterpret it.

Although I only have one evening’s evidence it appears that Stephen McIntyre, a mining engineer from Canada, wished to analyse the hockey stick data (http://en.wikipedia.org/wiki/Hockey_stick_controversy ) and was unable to get the data. I do not intend to debate the historical accuracy of this – the question is whether he has the right to do so . It is quite reasonable to assume that he had statistical and mathematical tools which were appropriate for this analysis. Put another way, if he were to submit a paper to J. Cheminformatics I would take the content of the paper and not his background as the material on which I would make a judgment.

It has been presented that McIntyre was challenging the priesthood of Climate Research and that he was excluded. Whether this is historically accurate is irrelevant to my argument and activity – I had a strong sense of closed ranks at the RI meeting. I sensed that if I asked for data I would not be welcomed and I suspect my current writings may not please everyone.

Science has always been multidisciplinary, but in the Internet age this has been accelerated. It’s possible for “lay people” (we need a better term) to take part in scientific activity. Galaxy Zoo (http://www.galaxyzoo.org/ ) has shown that “lay people” can author peer-reviewed papers in astronomy. There is absolutely no reason why anyone on the planet cannot, in principle, make contributions to science. Einstein worked in the patent office, Ramanujan in a government accounting office. (But before you all jump in remember that science is very hard, usually boring, work and has to be done carefully and with the right tools).

My concern here is with the cult of priesthood. I had the privilege or hearing Ilaria Capua speak of her campaign to get avian flu viruses published Openly. Until her work there was a culture of closed deposition and the data were only available to those in the priesthood (and I believe gender may have been an implicit issue). I can’t find a Wikipedia entry (there needs to be one) so have to link to

So what can and should I do to address this. I believe Open Knowledge (Open Data, Open Source, Open Bibliography) is a key activity. It librates and enables. It is only threatening to indefensible positions. Of course not all data can be made Open, and nor can all code, but there is no reason why bibliography cannot (for example OKF’s CKAN).

For the record – the RI meeting on CRU emails. PM-R ranting [tweeted by Brunella Longo (http://www.pantarei.it )] 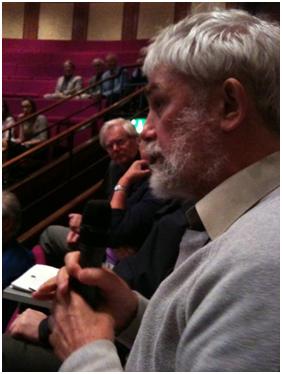 One Response to Open: Challenging Priesthoods