According to an article today the US Army has declared war on PowerPoint:

The problem is, apparently, this diagram. I reproduce it without permission but since it is presumably a work of the US government, albeit highly creative, it should be in the Public Domain. 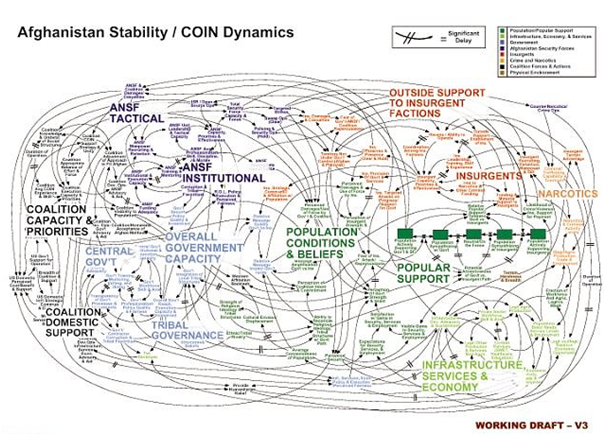 Now I am opposed strongly to the current use of Powerpoint and include in my slides:

I was proud when I had invented it and then found that Edward Tufte had already pre-empted me (http://www.edwardtufte.com/tufte/powerpoint ). His reason is quite different from mine, though I also agree with him. His concern is that Powerpoint reduces the creative input in communication to a set of bullet points – it corrupts human thought and dignity.

My concern is that it corrupts information – it reduces semantic graphics (assuming they were) to non-semantic binary. However now that Powerpoint exposes semantically (in XML) I have less quarrel with it from that point of view but have grown to adopt Tufte’s concern even more strongly – the linear flow of information. A slide show can only be shown in one direction – my own approach is to select whatever visual is needed at any stage. It’s not easy – and it doesn’t save easily – but it allows instant reaction to the audience and their needs.

I actually have no issue with the fact that the army diagram is in Powerpoint. The question is whether the information is useful. If it is, then it’s highly complex. A graphic is far more useful than reams of dense text (I suspect the textual equivalent of this picture would be at least 100 pages). I cannot tell whether it is actually a useful analysis of the concepts – I have little faith in any military analysis benefitting the world. (Like 2 million others I demonstrated against our involvement in Iraq and Afghanistan and events have justified our view.). But if it’s a useful set of concepts and if it’s useful to the generals then I suspect the graphic is useful.

Here is a biochemical example (taken from http://abeautifulwww.com/GeneVisualizations_E01C/roche1_3.jpg without permission but with thanks) 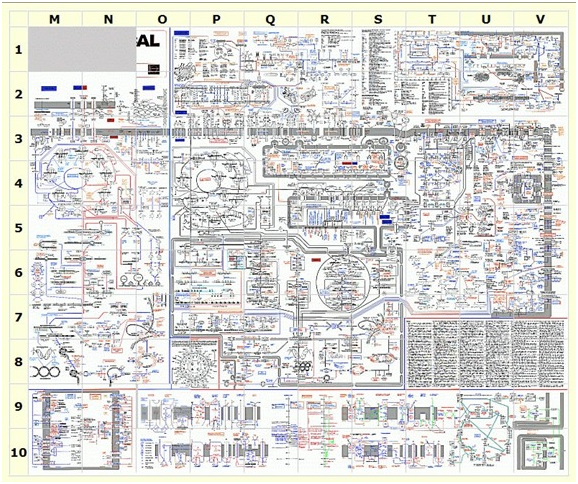 It’s complicated because it represents a living system and living systems are complicated. We desperately need a non-reductionist approach to this – or to delegate or thinking to computers.

One Response to American army declares war on Microsoft PowerPoint