Meeting on the 1515 from Cambridge

Today Henry Rzepa invited me to his inaugural lecture – and maybe some of that later. So I went off to the station and walked down platform 2 when I though I saw a familiar face – Cameron Neylon. Now Cameron is coming to visit us and talk the week after next – had I missed the date.

No – it was a group of folks involved in (Open) publication who’d been to PloS to talk about article-level metrics (i.e. can we measure the value of a paper rather than simply the journal). But very shortly we were joined – again by chance – by Kaitlin Thaney – weird since I’d been in Boston (and she was in Cambridge). Kaitlin’s from Science Commons which readers of this blog will know works to make science Open – primarily though CC0, community norms and other intruments and advocacy.

This was really fortunate since I have been ivited to a COST meeting in Portugal in 2 weeks time to talk on Open Data relating to HLA. (Human leukocyte antigen) 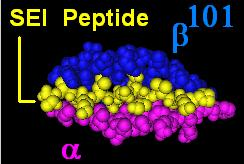 HLA is one of those WOW! Proteins that as soon as you see it, you get the message – it wraps a peptide and presents it to T cells. It’s got a groove which binds the peptide in a specific manner.

Anyway this group wants to explore data sharing in their community and they’ve asked me to help them with Open Data. Although I pontificate on this, I’m not really an expert (although very few people are). So I was able to catch up with Kaitlin and Cameron and pick their brains so that I could give some reasonable advice in Portugal.

The simple advice is be simple. That means dedicating your data to the public domain. Anything else is more complicated and this complexity brings effort and potential division. That’s why the OKF’s OPEN DATA tag is so useful.