Egon Willighagen has made a clear and appropriate statement/request of what he would like from CrystalEye:

Egon Willighagen Says:
November 5th, 2007 at 11:09 am e
Depending on the differences between the RAW and COMPLETE CMLs or maybe CIF files, I would be interested in the one or the other. I am not interested in HTML pages (TOC, indices), images, feeds, histograms, etc, as that would be something my copy would do itself.
The data corpus of CrystalEye, that’s what I would like to download. These CML files are a poor shadow of CrystalEye, only in terms of website functionality. But my interest would not be in setting up CrystalEye2, but would be to have access to the data to:
– link to CrystalEye entries (assuming the CMLs contains a CrystalEye identifier)
– derive properties myself
– test the new CDK atom typing algorithms (which chemistry is there in the CIF files that CDK cannot deal with yet)
– detect uncommon geometries
– …

PMR: This is clear and probably overlaps closely with what the crystallographic community wishes. I remind readers that this work was initiated by a summer student, Mark Holt who was sponsored by the International Union of Crystallography. Obviously, therefore, we are interested in feeding material back to the crystallographers if possible. We are also likely to be funded to continue some of the crystallographic stuff.
The information flow in CrystalEye is roughly: 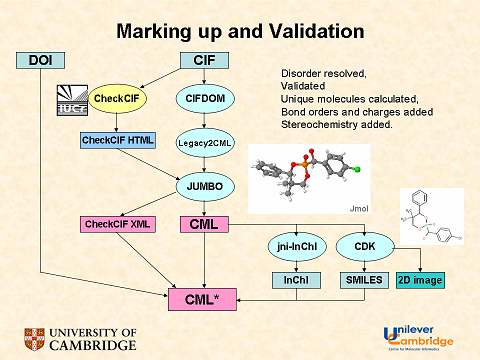 This was the process when Nick reported it at ACS. It’s changed slightly. CIFDOM is now CIFXML and it emits RAWCML. CML* represents CompleteCML. The 2D coordinates (but not the actual images) are held in CompleteCML. Complete CML also contains the moieties, each with its own InChI.
To respond to your requests:
– link to CrystalEye entries (assuming the CMLs contains a CrystalEye identifier). [PMR: The Atom feed contains the link – see above]
– derive properties myself [PMR: certainly. You should be able to work directly on the crystal structure and/or the moieties. The only thing you don’t have is the fragments.]
– test the new CDK atom typing algorithms (which chemistry is there in the CIF files that CDK cannot deal with yet) [PMR: I think there will be objective problems with coordination compounds and organometallics. We normally rely on the author to give the overall charge on a moiety. If they don’t we are usually hosed for coordination compounds.]
– detect uncommon geometries. [PMR: Certainly and we’d love to help. The bondlength plots already do this, and they are probably the first place to start. We would also plan to organise by fragments. Some fragments will have only one occurrence, others will have thousands (we would expect over 100,000 examples of phenyl groups as it can occur 10 times in some structures). Ideally we would do a cluster analysis for each fragment and then you could look for outliers – I did a brief hack at this some years back – in fact I think we corresponded. There is also enormous possibility in intermolecular interactions, perhaps a histogram of close contacts for X..Y
And we invite collaboration.

This entry was posted in crystaleye, open issues. Bookmark the permalink.

One Response to CrystalEye: request for subsets