Totally Synthetic, Chemspider and I have been discussing the value of InChIs in blogs. TS’s blog is, of course Openly available under CC licence, and he is widely revered in the community for the beauty and acuuracy of his structural diagrams. This post is a slightly light-hearted voyage through what can be discovered with Toll-Access barriers in place. I leave readers to judge whether TSand Pubmed are up to the ease and value of the information from commercial providers.
I’m reading this from outside the University and I do not have a VPN. This is useful as it shows me what it’s like to be an information-impoverished reader. TS blogged today about Diazonamide A , a natural product which was billed as the next big breakthrough in cancer some years ago. (It has 4 reports in Pubmed about its biology, and 26 ones about the chemical synthesis. Taxol has 30,000). Anyway TS has taken the advice of the Blue Obelisk list and managed to put InChIs into his blog.
I’ll show his beautiful-as-always structure at the end, but meanwhile I wanted to see how easy it was to find the structure from freely accessible sites. This includes most abstracts (in science it seems to be almost universal to post abstracts in clear, so be grateful).
Wikipedia does not list it, but has the (intriguing and misleading) entry under “Trivial_name”:

For example, the most important structural feature of Diazonamide is that it’s a nonribosomal peptide, which is denoted by the suffix “amide“.

PMR: it might have started as a peptide but I don’t think many people would now call it that. (Unless there is another Diazonamide that I don’t know of).
So on to the latest synthesis (Magnus, Cheung, Goldberg, Russell, Turnbull and Lynch. JACS, 2007, ASAP. DOI: 10.1021/ja0744448.), remembering I can’t read the full text. The abstract is a superb illustration of hanging links (NullPointerExceptions in Java):

Abstract:
During the course of studies on the synthesis of diazonamide A 1, an unusual O-aryl into C-aryl rearrangement was discovered that allows partial control of the absolute stereochemistry of the C-10 quaternary stereogenic center. Treatment of 30 with TBAF/THF gave the O-tyrosine ethers 31 and 32 (1:1), which on heating each separately in chloroform at reflux rearranged to 33 and 34 in ratios of 84:16 and 56:44, respectively. This corresponds to a 70% yield of the correct C-10 stereoisomer 33 and a 30% yield of the wrong C-10 stereoisomer 34. Attempts to convert 34 into 33 by ipso-protonation and equilibration were unsuccessful. Confirmation of the stereochemical outcome of the rearrangement was obtained by converting 33 into 37, an advanced intermediate in the first synthesis of diazonamide A by Nicolaou et al. It was also found that the success of the above rearrangement is sensitive to the protecting group on both the tryptophan nitrogen atom and the tyrosine nitrogen atom.

PMR: What a splendid piece of non-communication! [My comments could apply to many publishers, not just ACS]. Without the full text (which, after considerable perusal will tell us what 1, 30, 31, 32, 33, 34 and 37 are) it’s almost meaningless. I am reminded of Alice’s comment on Jabberwocky:

“Somehow it seems to fill my head with ideas – only I don’t exactly know what they are! However, SOMEBODY killed SOMETHING: that’s clear, at any rate — ‘”

PMR: and the authors made something from something else…
So off to Pubchem. Many compounds made by synthetic chemists are no in Pubchem because they are of no interest, but Diazonamide is. It has a structural diagram [1] I think it’s correct, and it’s certainly a lot better than the Pubchem offering but it’s not beauty – except for Shrek.
Let’s try Chemical Abstracts. It’s got every compound ever made. Maybe they will let me have a free go… (STNEasy) I find: 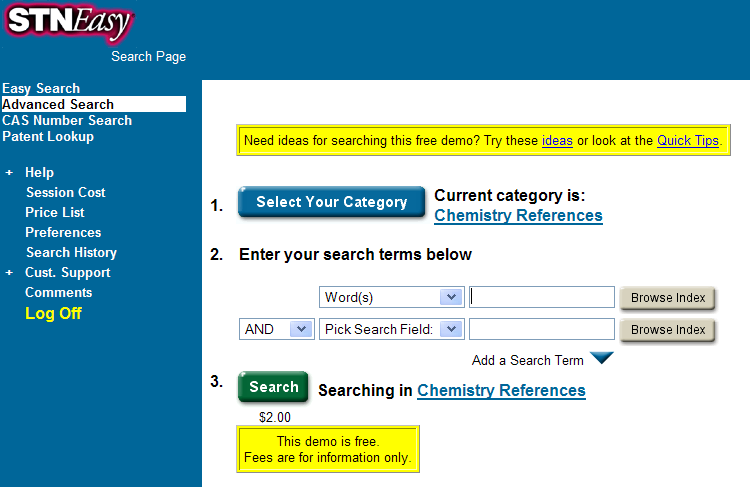 A free demo! Just what I wanted… 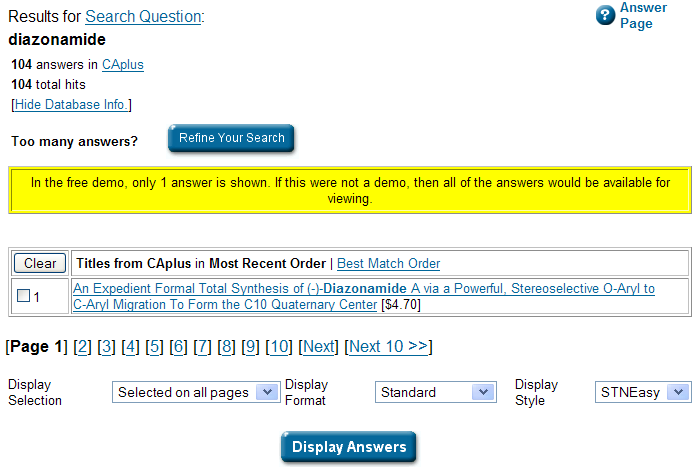 PMR: This is fine, and it points to the same abstract, but I can’t get at the structure. Let’s try CAS-Number lookup – it will tel me the number and the structure… and there is a free demo as well: 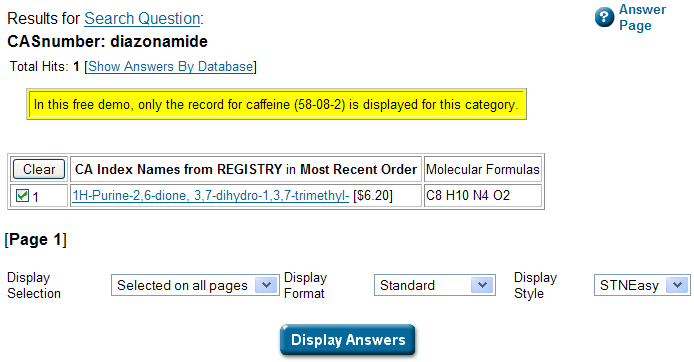 Oh dear… Yes, a free demo, but only if you are looking for caffeine. I get get all I want about caffeine from Wikipedia without paying 6.20 USD. Ah well,
So, off to chemspider which is free. The search for diazonamide A reveals: 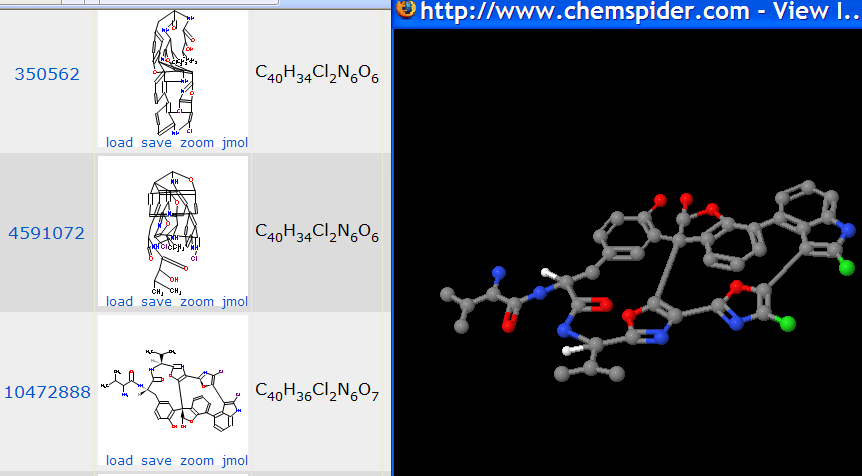 10472888 is shown at full size. (There are two more structures but both are  equally unreadable). Note that the atom counts of the structures are inconsistent – the actual composition – I think – is that of 4591072. I try to zoom the formula and get a featureless gray square on both IE and Firefox. So I try Jmol (shown right). Now the molecules are three-dimensional but the coordinates in chemspider are those of the 2-D diagram. Personally I regard this as extremely misleading and would NEVER use Jmol for 2D diagrams, but I shan’t pursue this here.
So I still don’t know what the molecule is. Where else? Perhaps I can use some more abstracts…
And the fourth one on Pubmed hits gold. It’s from PNAS: 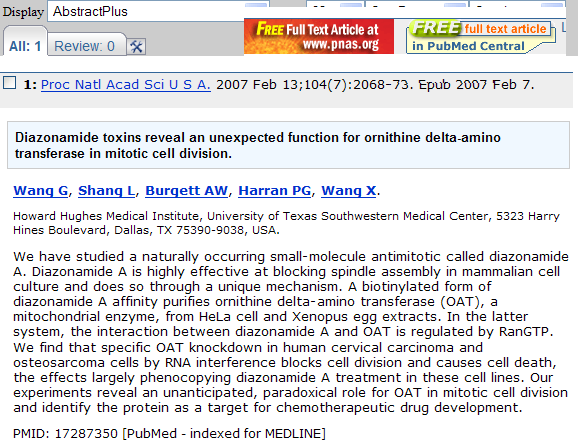 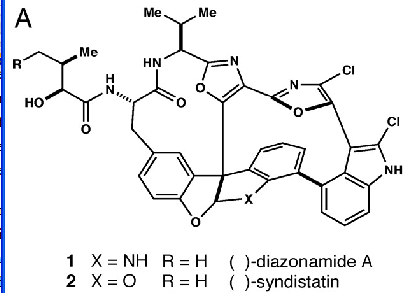 Truth at last. (For non-chemists the exact width of the lines matters, and the pixellation makes it very difficult to be sure. But I’m sure it’s correct.
And now what you have been waiting for – Totally Synthetic’s structure:

I think you’ll agree that the blogosphere is starting to emerge as a serious place to look for chemistry.
[1] pasted directly from the Pubchem site, suggesting we can create an image library for chemical structures