Nature Protocols: How much can we re-use?

In my last post (Nature: How much content can our robots access?) I asked general questions about what data, if any, in a scientific article publishers would not allow humans and robots to use without permission. So, as an example, I’m asking Nature what parts of a data-rich article can be re-used automatically.
The model I have is that our robots can access electronic publications, extract data, and re-use it. Ideally we would like XML, but text and PDF can give good (though not perfect) results. Nature has recently brought out “Protocols”, which publishes recipes. I think this is a great idea – not enough credit is given to the actual work laboratory done in many subjects. So I give some snapshots (claiming fair use as the paper is freely readable and I haven’t taken the whole) show what our robots can do, and ask what I am permitted to do:

That’s the abstract. I expect it’s on Pubmed, so perhaps my robots can mine it for chemicals?
YES/NO?

This is one of the molecules mentioned in the paper (there are 10-20). This is the normal way of communicating the structure of a molecule, but it’s also an image. My robots can download it and interpret the structure. But technically it’s an image. Are the robots allowed to download and extract the molecular data without permission:
YES/NO
So then the protocol shows what actually happens in the reaction, and notes that there is a critical patch of colour:

Here the only way of communicating the FACT of the reaction colour is to show an image. This isn’t a creative work of art (though there are good photos and bad ones) but is an ESSENTIAL part of the record. There are now systems which could be trained to browse the Internet and return all flasks which contain a greenish liquid. Can we download and analyse images of experimental results:
YES/NO:
And here is the spectral data. 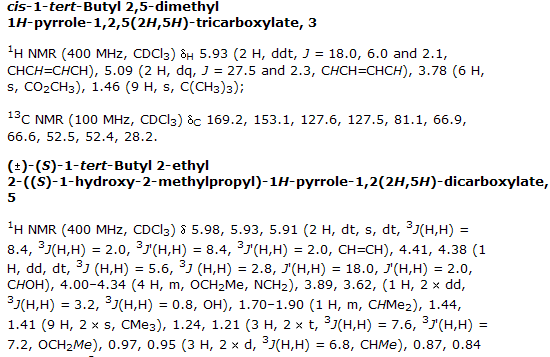 Can my robots download this and turn it into semantic data.?
And in doing so this is the sort of thing that OSCAR can produce. It’s taken part of the text and identified all the compounds (and worked out the atomic connectivity – see “furan” at the right). 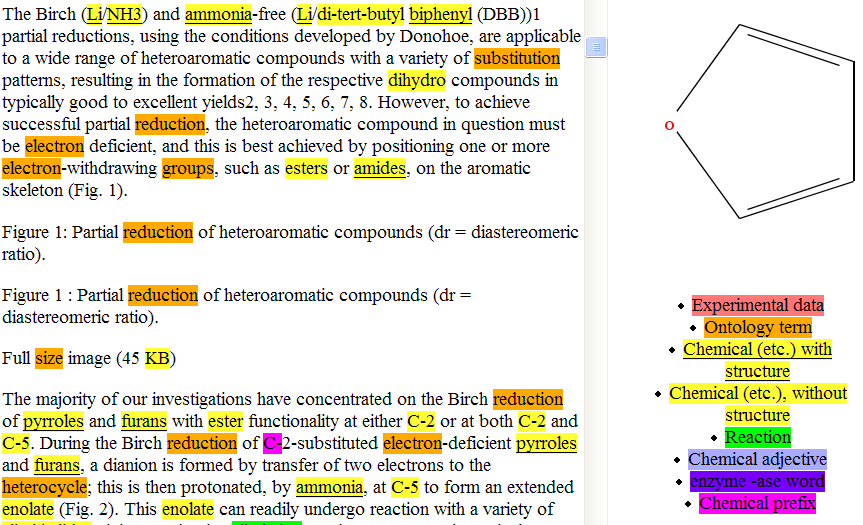 All of this is enormously valuable. If we are allowed to do it we can answer questions like “what reactions involve furans, or pyrroles, use Sodium ammonia, and undergo a light green colour”.
But it will only happen if publishers let us have access to their data without any barrier – no written permissions, no hangup over scientific photographs and images.
I’ve put Timo on the spot, but I trust him to be clear. That will make it easier when asking the other publishers later.

This entry was posted in open issues. Bookmark the permalink.