The Ridge of Refactoring 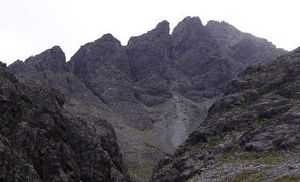 The Island of Skye has the most dramatic mountains in the UK, and Sgurr Nan Gillean is one of the most visible and well known. For me the Pinnacle Ridge (left) [1] epitomises the reality of computing.
There is an often quoted Gartner’s_Hype_Cycle for technology with a graph like this (not Open). After the

Great fun for consultants. I sometimes even believe it. However our software projects usually behave like this.

What is refactoring? A metaphor might be maintaining a garden (weeds, pruning, all the seeds of decay). Lots of work goes in but little seems to change. Sometimes (as when parts are ploughed up) it seems to go backwards. Refactoring is making your code better without having anything new to show people. It’s time-consuming, often solitary, and filled with local troughs of disillusion. Frequently you go downhill and when you have climbed the nest peak you are only a little higher than before. But it is a little higher
Here’s a simple example. I want to print some lines to the output (don’t worry about the Java, the idea should be clear)

This code goes through each string by incrementing the index i and printing it. I have written thousands of little loops like this. It’s not wrong, but it’s not as good as it good as it could be. Why?

and several other ways of introducing time-bombs
So I edit it:

I haven’t changed the functionality of the code – my colleagues won’t notice anything different. I might have had to make many hundreds of edits like this (“blood on the floor at midnight”). There will be many times when I am disilllusions – the code no longer works. Often I feel like a hermit crab who has discarded its safe shell and hasn’t yet found another. I can’t go to sleep until it’s fixed. I don’t know how long that will be. Programmers make mistakes at 0300. There is fog all around (this is very common in Skye and in the Cuiilins the compas points in the wrong directions).
Finally it all compiles. And the Unit tests (more later) run. I get the green bar. Now I can go to sleep (or at least to bed).
So what is better, and why did I refactor? Simply, the code is easier to read and less likely to break. I can output the result to somewhere other than the screen. If someone in the Blue Obelisk or elsewhere wants to re-use it it’s easier and quicker. It’s close to a community component. And that is what we are striving for.
The good news is that Refactoring is very well appreciated in the community. Eclipse has special functions for refactoring. With a little investment in time it can go through all your code and make simple changes (rather like this one) on hundreds of instances without making a mistake. Now that’s productivity!
[1] See http://en.wikipedia.org/wiki/Image:Pinnacle_ridge%26gillean2.jpg for authorship and (Open) copyright of image

This entry was posted in programming for scientists. Bookmark the permalink.